Haim Israel, Head of Global Thematic Investing Research, explains how 14 moonshots – or radical technologies – could represent approximately $6 trillion in market opportunities by the 2030s. He also discusses the rapid pace of technological transformation and the need for companies to invest in “the next big thing” or risk becoming displaced.

Watch the CNBC TV interview and read the redacted report "To the Moon(shots)! – Future Tech Primer."

In the meantime, if you’re looking to catch the next Apple, or Amazon or Alphabet on the way up, our next guest has 14 investing ideas. He calls them moonshots that could be the next major tech franchises. Joining us this morning, Bank of America’s Head of Global Thematic Investing Research, Haim Israel. Haim, we love this note. It’s so fascinating. We’ll get to some of the categories here: 6G, carbon capture, electric vertical take-off and landing. But I guess my question first would be: what do all of these innovations have in common, if anything?

Carl, Julia, Jon, it’s a pleasure to be here. What’s relevant to all those 14 moonshots? Those are radical technologies which are on the drawing board or under the radar and being developed and will change our lives. That’s one category. The second category that are still small, but we believe that those 14 moonshots together are representing 6 trillion dollars of market opportunities. We are thinking about…okay let’s take the internet before 2000. Let’s take the SmartPhone before 2007 or the first iPhone and try to understand now, today, what will be the technologies which will change our lives that we’ll have a need for them and are right now under the radar.

You do point out, the pace at which the themes are transforming business is blistering, surpassing experts’ forecasts by decades because we tend to think linearly but progress occurs exponentially. You do have some compound annualized growth rates. 6G is in the clear lead. I wonder is that because it’s the closest or is there something else going on?

It’s because the need is the biggest and, yes, it is the closest. And the interesting thing about those growth rates that you’ve mentioned is that we don’t understand how big the need is for 6G today. We still are in the process of getting 5G. Most of the world do not have 5G right now, but the rate of growth that we’re seeing in accumulated data right now is just mind boggling. We’re going to be in a position, very soon, in a couple of years’ time, that 5G, before it’s even been deployed yet, is just not going to be enough. So we believe that the growth rate of 6G is going to be starting in the next couple of years. We are generating 2.5 quintillion bytes of data every day. Quintillion is a million trillion bytes of data every day. This number is multiplying itself every two to three years. During the corona crisis, we all stayed at home and increased data traffic even more. Plus we have a lot more applications that are consuming more and more data. We don’t understand that before the end of this decade, 5G is just not going to be enough. And if that’s going to be the case, 6G will have to be deployed in probably three to four years. 5G is going to be probably the shortest-lived “G.” It’s fascinating. The number one technology – the revolution – 5G that everybody talks about is probably going to be shortest-lived technology out there.

It’s so fascinating. Haim, I find this whole thing so interesting. But what is most interesting to me is this idea that you’re looking for the next Apple, the next Tesla, the next Alphabet, and at the same time, we’re seeing those companies invest in this disruptive technology. How do you reconcile finding the upstarts…the companies that are the next ones of these, while at the same time you have Alphabet really trying to invest to create themselves?

You are completely right and this counts because I think what the big tech companies are now understanding is that we are moving so fast that the technology we have today are just not going to be enough. As you said in the beginning, Carl, as we mentioned, we try – we usually think linearly, but grow exponentially. Now a couple of things that highlight exactly your point. Now the average lifespan on the S&P 500 back in the ‘60s used to be give or take, around 62 years. Now we are talking about anywhere between 15 to 12 years which we are expecting. So if the big companies are not going to invest today in the next big thing, they’re just not going to be around anymore. So I think those kind of companies understand. They understand that technology is changing very, very fast. Now in 2000, some of us did not even have emails. We definitely did not understand that the internet was going to take such a big part of our lives. And that was only 20 years ago. We’re going to move much faster from here on, with processing power, AI, big data analytics. All those tools are allowing us to move way faster. So the big tech companies understand that if they are not going to find the next big thing today, there might be a case in a couple of years’ time, it’s just not going to be there.

Haim, have you thought about these strategies and structures in companies that are going to be necessary to succeed in the future because sometimes strategy can kind of eat technology for breakfast. If you think about Apple’s vertical integration and how different it would have been if they had licensed iOS out instead of building the whole iPhone themselves. That’s like, that’s the whole ballgame. Or you know, look at Qualcomm and its decision to become an arm licensee and do Snapdragon and sell chips and not just do IP. So, have you thought about what strategies within those technologies are going to be key to success in the future?

We are moving into a world of data. We are moving to a world of whoever controls data will control the world eventually and will be able to develop more and more. So if I think, you know, there’s a lot of different strategies over there and you’re so right that by moving a little bit to the left or the right, you can miss the next big thing. If I can point out one strategy, it’s that if I’m fully control of the entire value chain of the data from the point of creation up until the point that I can actually use it and make the next big thing, I think this is what everybody are aiming for right now. Now we usually used to say that you know, if data was oil, probably you know, the big tech companies or China would be the next Saudi Arabia. If you control data – and that’s the strategy right now – and you leverage on it, and you maintain it in house, and you can know how to exploit it, this is probably the next big thing going forward. You can never give up your leverage on data.

It’s 150 pages. Anyone who gets a hold of it should read every page because we could do a whole hour on some of these categories, Haim. Appreciate your time very much. Great to see you, thanks.

Are Not FDIC Insured • May Lose Value • Are Not Bank Guaranteed.

"We are moving into a world of data…whoever controls data will control the world." 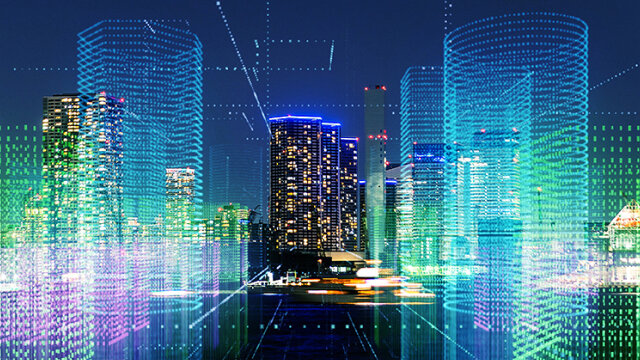 Podcast: Moonshots that may change the world

Take a fascinating journey into the future of tech